When operations ceased in 1995 and total remediation was completed in 2005, the controversial Rocky Flats Nuclear Weapons Plant left behind a dark legacy of mismanagement, environmental misconduct and personal sacrifice by workers and their families whose dedication helped the United States win the Cold War. 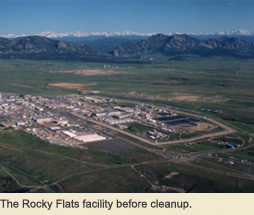 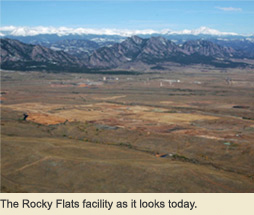 Rocky Flats’ buildings and streets are gone now, removed in a ten-year, $7 billion Superfund clean-up that was the largest environmental remediation project in U.S. history. The actual ground where the plant stood is closed-off, monitored and managed by the U.S. Dept. of Energy (DOE) Office of Legacy Management under the Comprehensive Environmental Response, Compensation and Liability Act and Resource Conservation and Recovery Act.

Surrounding the former plant site is its old buffer zone, a beautiful sweeping vista of rolling hills, creek beds and hidden ravines across 5,237 acres — more than all the parkland in the City of Denver. In 2007, that land officially became the Rocky Flats National Wildlife Refuge, operated by the U.S. Dept. of Interior’s Fish & Wildlife Service.

The Refuge came about through dedicated efforts by a broad coalition of communities, elected leaders, government agencies, environmental groups, and conservation organizations, all committed to protecting this prairie sanctuary at the foot of the Rockies. 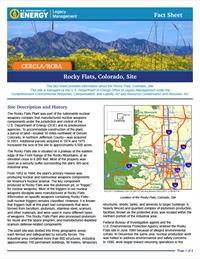 For a detailed description and history of the Rocky Flats weapons plant that operated from 1952 to 1994 and the subsequent $7 billion environmental clean-up completed in 2005, download this fact sheet from the U.S. Dept. of Energy.

Also, be sure to visit the Rocky Flats Stewardship Council for more information on how Rocky
Flats is being managed since the clean-up and Refuge opening.