When Candelas resident Eric Griffiths retired from his chiropractic career it afforded him the time and opportunity to fulfill one of his long-time avocations – painting. That pursuit has produced a beautiful vision of the Rocky Flats National Wildlife Refuge where, one day, the buffalo again might roam the rolling plains.

While Eric had dabbled with painting for years, he could now hone his skills and create some truly beautiful images. He enrolled in adult classes at the Art Student League of Denver that were created for those interested in enriching their lives by improving their skills as artists. 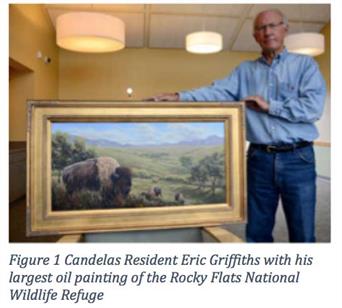 Eric considered watercolors and acrylic paints but landed on oil painting as his go-to medium. “I decided it was better to concentrate on one technique and do it well instead of trying to learn multiple artistic methods,” he says.

With his new skills Eric focused on painting his favorite subjects: western landscapes and wildlife. When he and his wife Kim moved into their new Candelas home bordering the Rocky Flats National Wildlife Refuge Eric could see his two favorite subjects right out his back window. 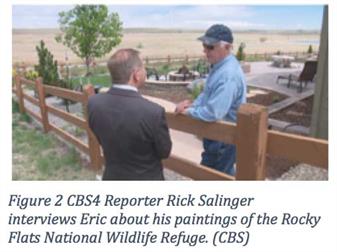 He took out his paint, brushes, canvas and began work. Along the way, his paintings caught the attention of News 4 Denver, which included Eric in a recent series of stories about Rocky Flats, the wildlife refuge and communities like Candelas.

In the process of creating his works of art, Eric added a new twist. His dream is that one day buffalo will be part of the refuge. So, using models from the Roosevelt National Park, he added that vision to a several of his refuge landscape works.

“In the future, I hope to gaze out my back window and see buffalo grazing the refuge alongside the other wildlife that inhabit the space,” he says. When that day comes, Eric and Kim will truly have a home where the buffalo roam.

Until then you can see one of Eric’s paintings hanging in the TownView Recreation Center. 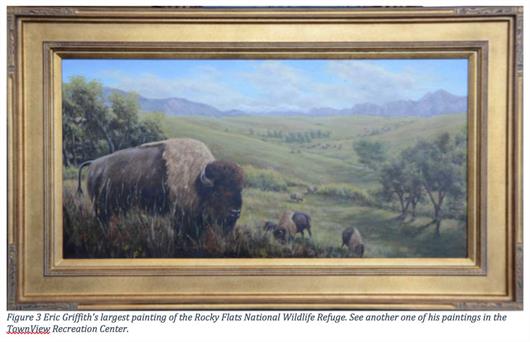