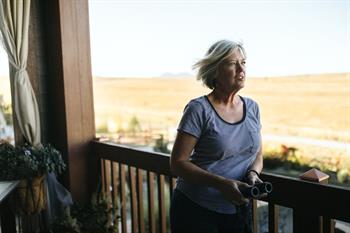 Being a certified master gardener, Kim wondered about the safety of a proposed controlled burn at the refuge to reign in noxious weeds and other vegetation encroaching on its pristine grasslands. She did her own research, and talked for several hours with Dave Lucas, who heads the refuge project for the U.S. Fish and Wildlife Service and has a long history with the agency’s extensive National Wildlife Refuge System.The federal government created the Rocky Flats Stewardship Council in 2006 to oversee management of the former Rocky Flats nuclear weapons plant site following successful completion of a massive $10-billion environmental clean-up, the largest in U.S. history. In 2007, the 5,237 acres that once made up the plant’s buffer zone became Rocky Flats National Wildlife Refuge.

Kim came away from the effort convinced that the prescribed burn was both necessary for the refuge and safe.

Then, in February 2015, a few months before Kim and her husband Eric were to move into their new Candelas home, she learned the burn had been cancelled after activists opposed to the refuge made numerous (and repeatedly disproven) allegations that the burn would harm people downwind.

“The U.S. Fish & Wildlife Service as well as the Colorado Department of Health and Environment made a compelling case for the controlled burn. When it was determined they would not go forward with it, I thought Uh-oh, something doesn’t tie in here because the data and science say it’s safe but something stopped it from happening anyway.”

After moving into her Candelas home Kim began paying even closer attention to the controversies surrounding the refuge as well as plans to make it an education and outdoor recreation area similar to Rocky Mountain Arsenal National Wildlife Refuge in Aurora. She attended public meetings where she encountered activists who allege that a massive government conspiracy is hiding the truth about how the refuge – and land adjacent to it — is “glowing” with deadly radiation just under the surface, that the public must not believe the literally millions of scientific data points and overwhelmingly conclusive research findings by every relevant federal and state agency. The refuge, many of the opponents believe, must not open to the public, but be topped with concrete and made off-limits to all living beings for a thousand years or more.

Given the intensity of the activists’ assertions, Kim began to question her earlier conclusions

“I went back and looked at the data from the Colorado Department of Public Health and Environment and the Department of Energy studies wondering ‘Did I miss something? Is there anything to support what they are saying?’”

Kim found nothing to change her earlier conclusions that Rocky Flats National Wildlife Refuge is safe. Referencing what she found on some of the activists’ web sites, Kim says “I’m not convinced by articles written in the 1990s by people with very little data, many years before the plant was torn down and the environmental remediation completed. Current data should prevail, and the volume of data about current safety is overwhelming.”

Knowing that the activists appear to be driven by deep-set anti-government, anti-development agendas, Kim realized that their fear-mongering and challenging the credibility of scientific data in opposing Rocky Flats National Wildlife Refuge could potentially have a negative effect on property values for Candelas and other area homeowners.

“I voted with my wallet,” she says, “based on the amount of safety information I was able to research and discover, all of it shared in an open, transparent manner.”

She also realized that it would be “a national travesty if the public was denied access to a safe and stunningly beautiful area because of a cloud of grossly inaccurate, unproven information hanging over it.”

When the lone citizen-representative position on the Stewardship Council became vacant earlier in 2017, Kim put her name forward, arguing that it was time for new communities springing up adjacent to the refuge to have a voice at the table as important local stakeholders. The organization agreed and named her to the one-year post.

“My main goal is to serve as a conduit of information for residents who have chosen to make this area their home,” says Kim. “I’m not sanctioned by Candelas or any other developers. I’m independent and there to give voice to the residents.”

“Complacency is the concern,” she adds. “If I can help educate people to answer their legitimate issues and irrational fears about this beautiful area that we call home, then I will consider my time on the Rocky Flats Stewardship Council a great success. And I’ll look forward to riding my bike through the refuge very soon.”

The next council meeting is February 5, 2018. Kim strongly encourages people in Candelas and neighboring communities to contact her if they have any issues they want brought before the council. Contact Kim at kim4candelas@gmail.com