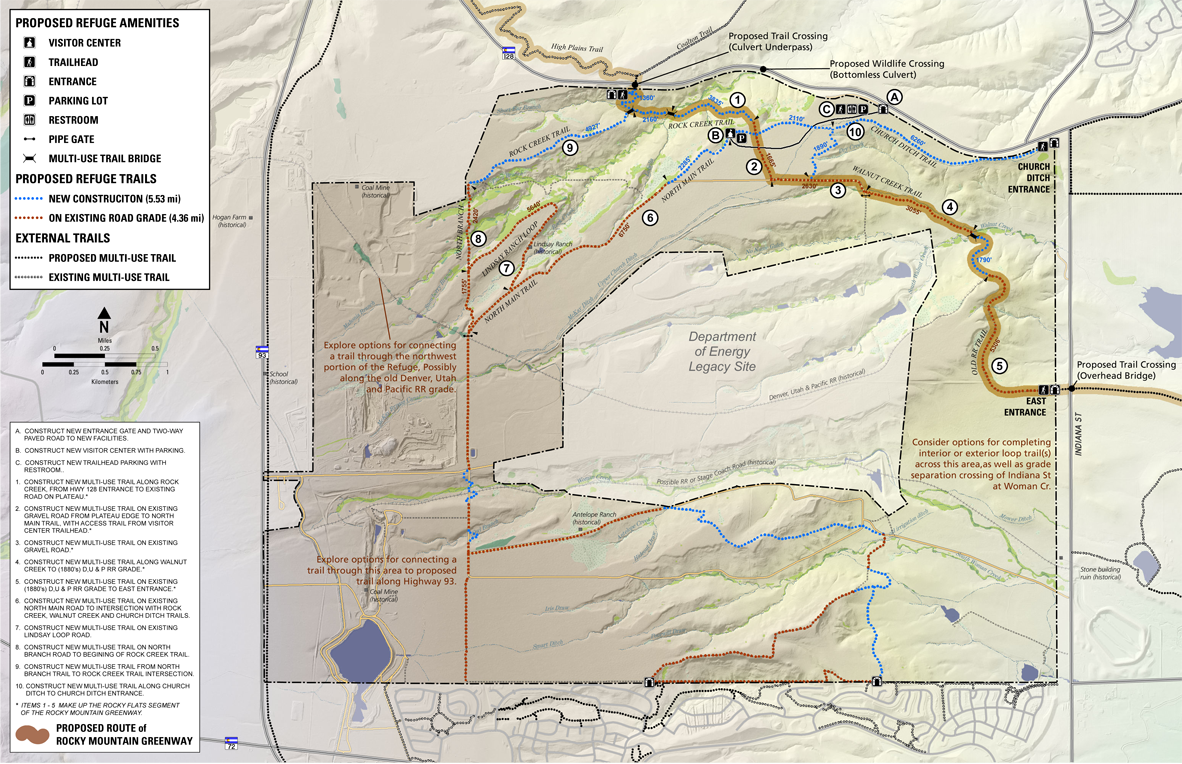 Caption: Above is the U.S. Fish & Wildlife Service’s official Rocky Flats National Wildlife Refuge development map, showing current proposed locations of hiking trails, visitors’ center, other amenities and where the Rocky Mountain Greenway – a multi-use paved trail – will connect Rocky Mountain Arsenal National Wildlife Refuge with Rocky Mountain National Park. Notice how Candelas’ own trail system (at the bottom of the map) will give residents easy access right into some of the Refuge’s most beautiful prairie lands. Click here to enlarge the map.

Caption: Rocky Flats National Wildlife Refuge Manager Dave Lucas of the U.S. Fish and Wildlife Service explains the past, present and future of the Refuge to Candelas residents in as presentation from 2015.

The Rocky Flats National Wildlife Refuge plans to open to the public in Summer 2018 but a number of activities must be complete before it can open. Some trails will use the roads already there. Other trails must be built. In addition, proper signage and trail markers must be installed and parking areas set aside.

Plans also call for construction of a multi-use administration building at the main entrance, which will be on Highway 128 along the northern border of the refuge. The refuge will likely open before the building is complete. In addition, a trailhead connecting to other regional trails will be built on the eastern side of the refuge along Indiana Street.

Approximately 20 miles of trails are planned and many, if not all, of them will be available year-round for hiking, cycling and horseback riding. Wildlife observation, photography and interpretation are also part of the plan.

Once it’s constructed, the multi-use building will serve as an information-stocked starting point for exploration of the refuge. It will also house exhibits about Rocky Flats history and the refuge. Eventually, it will be the jumping off point for seasonal programs like guided tours, guided hikes and other nature programs.

For those wishing a sneak peek at the refuge before it opens to the general public, the U.S. Fish & Wildlife service offers space-limited monthly hikes. To reserve a space call (303) 289-0930.

Here’s more from the Greenway Trail’s official website, which you can see here.

In 2012, Colorado Governor Hickenlooper and Department of the Interior Secretary Ken Salazar formed a steering committee to oversee the development of a trail that would someday connect Denver area communities to the high peaks of the Rocky Mountains. They would call it the Rocky Mountain Greenway. But the initial vision for the trail was not just about connecting two points on a map; it was about connecting people to those places and to all of the amazing natural places in between. The Rocky Mountain Greenway would be used to enhance existing community trail systems, close gaps in regional trail connections and provide new ways to access the natural recreation and interpretive resources of the Front Range.

In 2013, under the guidance of the Rocky Mountain Greenway Steering Committee, a feasibility study was published that identified feasible trail connections between the Two Ponds and Rocky Flats National Wildlife Refuges. Existing regional trails and new trail alignments were considered to make the connections, and while this study eliminated potential alignments due to issues with difficult terrain or private land ownership, it made new partnerships possible, and allowed communities to collaborate to create new connections between them.

In early 2016, construction began on the section of the Rocky Mountain Greenway connecting Two Ponds National Wildlife Refuge with the Broomfield Great Western Open Space. Read the 2013 Feasibility Study for this section of the project. Governor Hickenlooper and former Interior Secretary Ken Salazar joined other federal, state and local officials on June 4, 2016, to celebrate the opening of this section of the trail in conjunction with National Trails Day. View photos from this celebration. In 2015, the Steering Committee began focusing their efforts on the next section of trail, continuing west from the Broomfield Great Western Open Space, through the Rocky Flats National Refuge and north into the City and County of Boulder. The draft feasibility study for this area is expected to be complete in the summer of 2016.

Funds for detailed environmental clearances and trail construction are being sought from several sources including state and federal grants and local capital improvement programs.

While this study provides some insight as to sensitive environmental areas, an in-depth environmental review and necessary National Environmental Policy Act clearances will be completed in future phases of the project development.