Yellow Warblers are one of many bird species that thrive in the Rocky Flats Wildlife Refuge. They breed in almost the whole of North America and as far as northern South America.

These beautiful birds are vivid yellow and greenish-golden. There are usually a few rusty red streaks on them as well. Their genus name Setophaga is from Ancient Greek “ses”, which means “moth”, and “phagos”, which means “eating”. And yes, they eat mostly insects by sitting on branches and catching bugs as they fly by. They also eat other invertebrates and some berries and other small fruits.

The breeding habitat of American yellow warblers is typically moist land with many small trees. They are also found in shrub land, farmlands and forest edges. Yellow Warblers will also migrate to suburban or less densely settled areas, orchards and parks. 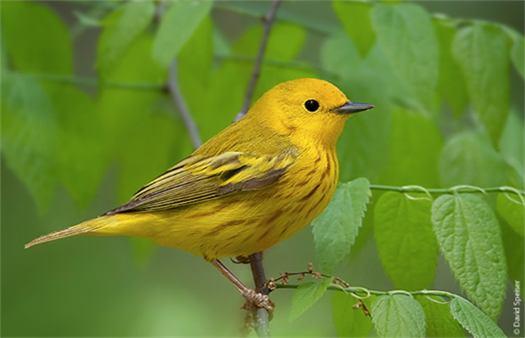 Yellow Warblers communicate with sweet musical vocalization. However, when they are defending their territory they produce a hissing call. They also communicate through their posture and touch.

A decline in Yellow Warbler populations have been noted throughout North America. This is mainly due to habitat destruction and pollution. Land clearance, the overuse of herbicides and pesticides for agricultural purposes and sometimes overgrazing have all hurt Yellow Warblers. The Rocky Flats National Wildlife Refuge provides a suitable and safe home for these beautiful birds!

Learn more about the wildlife at the Rocky Flats Wildlife Refuge here!