The Western painted turtle is one of the many animals found in the Rocky Flats National Wildlife Refuge and is the most common turtle in North America.

The turtle’s top shell is dark and smooth and its skin is a variety of colors such as olive, black, red, orange and yellow. The Western painted turtle has an intricate red pattern on the bottom of its shell. This characteristic is how you can tell this turtle apart from other types of Painted turtles. In the wild adult Western painted turtles can live more than 55 years.

This turtle eats aquatic plants, algae, and small water creatures such as insects, crustaceans and fish. They build their habitats in the shallow waters found in marshes, ponds, creeks and lake shores. At the Rocky Flats Wildlife Refuge the turtles primarily live in ponds and streams. 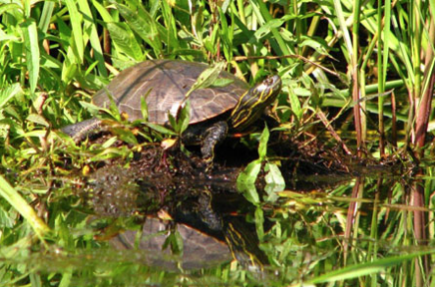 Reliant on warmth from its surroundings, the Painted Turtle is active only during the day when it sunbathes for hours on logs or rocks. During the winter the turtle hibernates, usually in the mud at the bottom of water bodies.

Although the Western painted turtle is the most abundant turtle in North America, the population has declined. Habitat loss and road kills have reduced the turtle’s population. That is why the Rocky Flats National Wildlife Refuge is so important. It gives these turtles a safe haven in the Denver area!

Learn more about the wildlife at the Rocky Flats national Wildlife Refuge here!